In 1920, La Société du Journal de Physique et Le Radium was a specialist French publisher. Today, EDP Sciences is an international academic publisher supporting the scientific community at all levels. This is a story forged from war and recovery, shaped by world-famous scientists and developed with an open attitude and science at its heart.

Along the way, many ideas considered ‘radical’ have appeared early in our story; e-publishing from 1995, open access and open science since the turn of the millennium and, more recently, Scientific Writing Masterclasses and Emergent Scientist (the first open access student-oriented scientific journal) to support the next generation of authors.

Last year, a new chapter in our story began when EDP Sciences became part of China Science Publishing & Media Ltd. and Science Press. Remarkably, it emerged that there was already a connection with Science Press. In 1931, Paul Langevin visited China and, at his suggestion, the Chinese Physical Society was established in August 1932. The Institute of Physics of Peiping Academy later became home to Science Press. 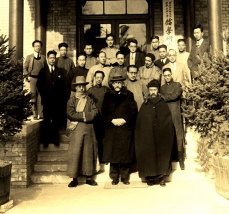 In the film, Mr Lin Peng, Board Chairman, China Science Publishing & Media Ltd. observes “EDP Sciences is an important family member of Science Press. We are very happy and proud of it. We will join hands with colleagues from EDP Sciences. Together we will make our share of contribution to promoting global scientific innovation and progress.”

As we embark on a new phase of international cooperation and encounter new Nobel Prize laureates such as Tu Youyou and other important scientists associated with the Chinese Academy of Sciences, we echo the words of Jean-Marc Quilbé, President, EDP Sciences, “On essaye d’être open sur l’avenir, il n’y a rien d’écrit et tout reste à faire.” Without doubt, we remain open-minded and welcome the notion that all is possible as we take our next exciting steps.

EDP Sciences is an international academic publisher which was founded by learned societies in 1920. EDP Sciences publishes high-quality scientific journals, conference proceedings, books and magazines, many of which are open access.

EDP Sciences was founded by eminent scientists including Marie Curie and Paul Langevin. Since November 2019, it is owned by Science Press which is itself majority-owned by the Chinese Academy of Sciences (CAS). CAS is the world’s largest research organisation and a prestigious learned society.

A special collection of new centenary resources has been created to mark our anniversary virtually. They include “Looking back in time – a brief history of EDP Sciences in pictures” which tells the stories behind some of our Nobel Prize winners including the only two people to win prizes in different fields. Other highlights include Paul Langevin’s “Avertissement” or first editorial, seminal archive articles from Marie Curie, Ernest Rutherford, Max Planck and Henri Becquerel and a selection of interesting facts and events which give a flavour of 1920.